Relationship between Culture and Society

Cultures are the product of human society, and it saves its culture by changing and transmitting to the next generation. Culture and society are counterparts like the two faces of a sheet of paper. It is secondary to society and is the man made part of environment. It is universal for human experience. It is dynamic because completely static cultures are dead ones but they don’t exist in contemporary societies of the world. Culture is both stable and ever changing. It is the way of life of the people while the society is the organized aggregate of individuals who follow a given way of life. Simply society is composed of people, the way they behave is their culture. Man is the sole culture building animal.

According to some sociologists, human society have gone through pre modern, modern and postmodern phases. Examples of pre modern societies are pastoralist and hunting societies. Modern societies are supposed to be industrial and capitalist societies. Those who believe in post modernity have no faith in science and technology as it can harm human beings with pollution, noises, nuclear weapons etc.

Technology determines how much a culture is influenced by its physical environment. For example, people of different climatic regions use different clothes, live indifferent types of houses arid use different material and food according to their seasons.

When technology increases in efficiency, and cultures are raised above subsistence level, then

Change in type and magnitude of technology is observed easily

According to Ogbun hypothesis, technology of a culture changes more rapidly than other aspects of the culture producing cultural lag. The idea is more Western, Certain East African tribes most readily accept changes in their religious beliefs.

Technology in cultures is mostly used for economic purposes 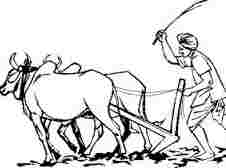